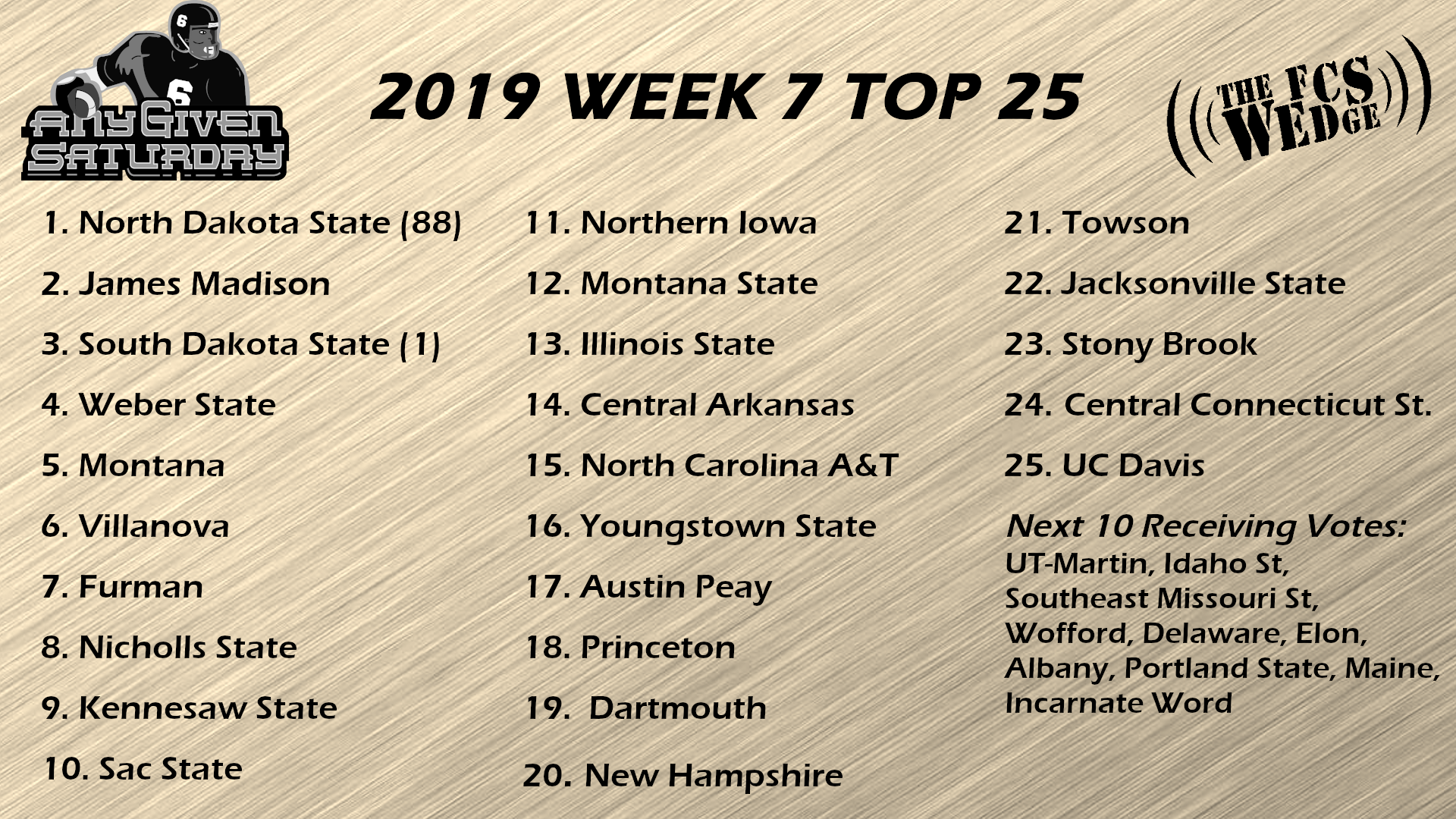 It was a tumultuous week 6 for teams in the AGS Poll as, once you got outside of the top 5, 16 of the 30 teams listed in last week’s poll that were in action this week lost and many were to foes ranked below them or not at all. Despite that the top 4 remained unchanged with North Dakota State, James Madison, South Dakota State, and Weber State in that order. Montana climbed up one spot to land in the top 5 for the first time this year at #5.

After that things got chaotic starting with Sacramento State who rode a big road win over previously 7th ranked Montana State to rocket up 12 spots to #10, their highest ranking in the AGS Poll ever. Austin Peay was another big mover going up 6 spots to set their new high water mark in the AGS Poll at #17. Dartmouth used a convincing victory over previously unbeaten Yale to rise 5 spots to #19. New Hampshire, riding a 4 game win streak, shot up 14 spots to land in the top 25 for the first time this season at #20. Jacksonville State and UC Davis each got a 4 spot bump to return to the top 25 coming in at #22 and #25 respectively. The best story of the week though has to be Central Connecticut State who, after their 5-1 start, made a 7 spot jump to #24 to get into the AGS Top 25 for the first time since 2009.

The teams going in the opposite direction were led by Montana State who fell 5 spots to #12 after their aforementioned loss to Sacramento State. Towson plummeted 11 spots to #21 after their 3rd straight loss and fellow CAA conference mate Stony Brook took a 6 spot dip to #23 after each were upset on Saturday. Southeast Missouri State, Delaware, Maine, and Southeastern Louisiana all dropped out of the top 25 after sustaining losses in week 6.

In terms of conference representation the Big Sky, CAA, and MVFC led the way each putting 5 teams into the top 25. They were followed by the Ivy League, OVC, and Southland who each placed 2 teams into the top 25. A season high 10 conference were represented in this week’s top 25. There were also 7 new teams that appeared in this week’s ORV section.